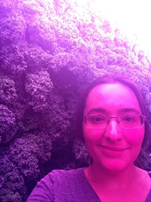 In May 2018, I travelled to Toronto Canada supported by a SUPERGEN Bioenergy Hub Research Mobility Award. In Toronto, I met with Modular Farms, a company specialising in an ‘off the shelf’, modular vertical farming system. I met with the two founders, as well as my collaborator, Professor Gail Taylor, Head of Plant Sciences at the University of California Davis. We were taken on a tour of the farm, and we got to ask lots of questions about the set up. The farm they are running is used for customer enquiries, training, crop testing as well as supplying Kale to a local catering company located just across the parking lot. They use ZipGrow towers which allow the crops to grow in a truly vertical fashion (see pictures). The system uses drip irrigation where water runs down the towers then is recycled, meaning there is far less water loss than a traditional farming system. The system uses artificial lighting for plant growth, and is a completely controlled environment allowing for growth optimisation. We were allowed to take lots of picture, touch the crops and the infrastructure (with gloves), as well as taste a number of the crops! They were growing several different crops including kale, lettuce, strawberries and an aromatic herb from Mexico which was delicious but the name escapes my memory! After touring the farm, we went to a local coffee shop and had further discussions with the company about their vision for the future in terms of agriculture and sustainable living.

Following this meeting, procurement began for a Modular farm by Gail at UC Davis. We have some really exciting ideas for experiments which could be run in this system, and I will be going over to Davis for 6 months this coming fall to set up the farm and begin testing. Without the SUPERGEN award I would not have been able to see the Modular Farm first hand, initiate an relationship with industrial partners, and be inspired to conceive a number of interesting research questions and experiments. I also would likely not have had the opportunity to go out to Davis to work on the system. I have already had a lot of insight which is feeding into the work of my fellowship on the feasibility of vertical farming for 2G bioenergy. Following my trip to Davis in the fall, I plan to return to the UK and apply lessons learnt to the rest of the aims of my NERC fellowship, as well as apply for further funds to carry out research in this exciting space considering the use of land for food, energy and water!